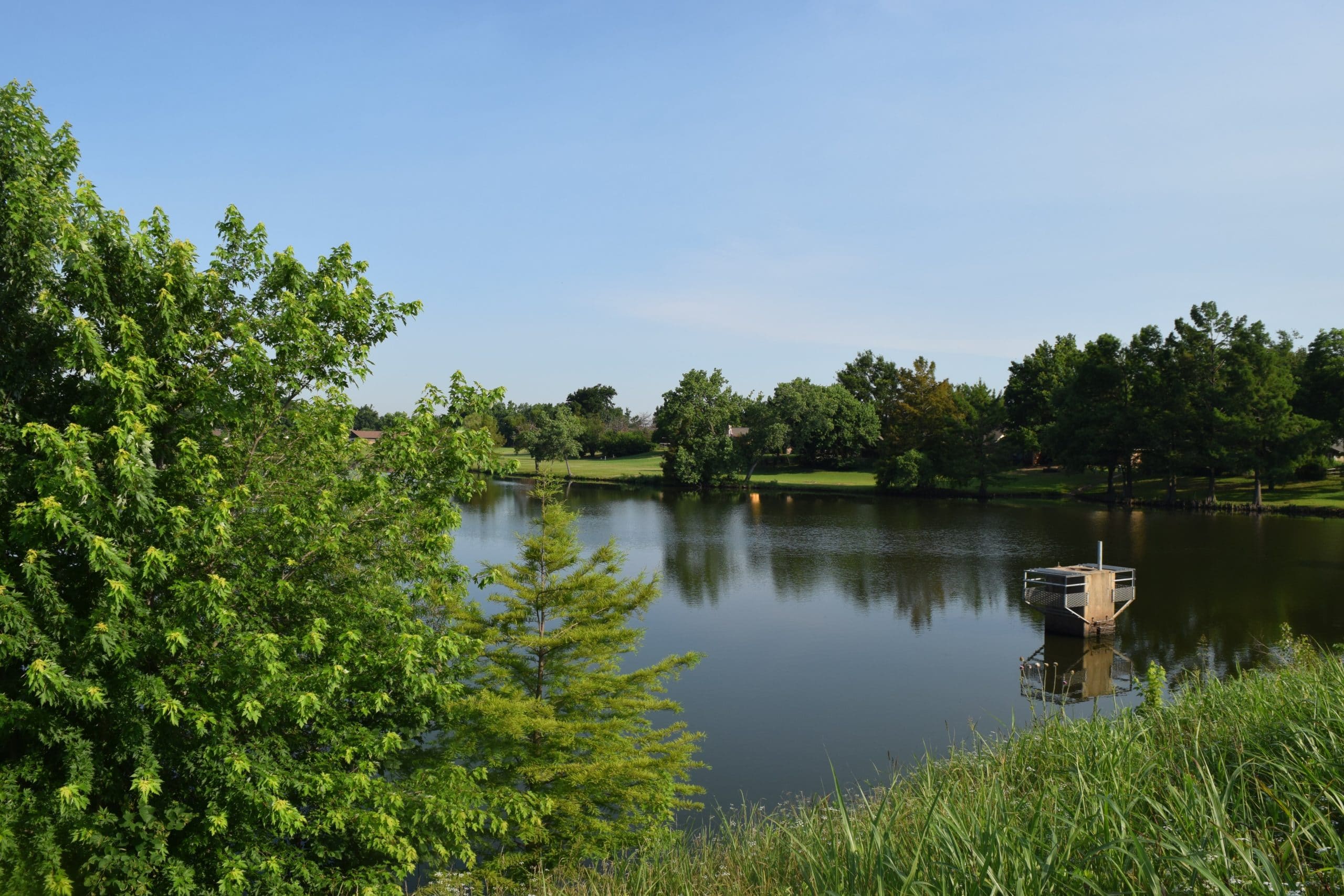 PROTECTING PEOPLE AND PROPERTY AROUND THE STATE

Upstream flood control dams provide essential protection from harmful flooding by allowing watersheds to temporarily confine and store water runoff after heavy storms. Oklahoma leads the nation in the construction of these essential dams, with 2,107 upstream flood control dams constructed with the assistance of the USDA NRCS Watershed and Flood Prevention Operations Program. This program assisted Oklahoma in developing watershed plans for 129 watersheds. By reducing potential flood damage, these dams save the state an estimated $96 million each year.

With 2,107 flood control dams in 61 counties, Oklahoma leads the nation in protecting citizens and property from the devastation of floods. Nine out of ten Oklahomans live within 20 miles of a flood control dam (92.9%). The state has always been a leader in flood control beginning with the construction of the first dam to be completed in the nation in 1948, Cloud Creek Dam Number 1. The dam located near Cordell, Oklahoma, is in the Cloud Creek Watershed, a tributary to the Washita River. This project was made possible by Congress passing Public Law 76-534 in 1944, that authorized eleven watershed projects in the nation and the construction of the small watershed dams began along with the establishment of land treatment with conservation practices in the watershed. The success in these eleven watershed projects convinced Congress to pass Public Law 83-566 Watershed Protection and Flood Prevention Act of 1954. This Act extended the Natural Resources Conservation Service (NRCS) (formerly the Soil Conservation Service) authorization to work with local watershed project sponsors to implement the Watershed Program in all states.

Oklahoma completed the first watershed project in the nation, Sandstone Creek Watershed Project in Roger Mills County. Over the course of this project, 24 dams were constructed between 1950 and 1953.

HOW DOES THE FLOOD CONTROL PROGRAM WORK?

The Flood Control Program’s primary strategy is to build small flood control dams on tributaries upstream from rivers or large streams. The series of dams in a watershed help trap runoff water during heavy rainstorms, which can then be slowly released over time through a pipe in the dam. In this way, the dams prevent excess water from reaching the river all at once, reducing flooding.

These dams are supported by other conservation practices such as terraces, ponds, diversions, grass plantings and grade stabilization structures. These practices are implemented on the land in the watershed to prevent erosion, reduce sediment and extend the lives of the dams.

To initiate a flood control project, local watershed project sponsors (in Oklahoma, these are typically conservation districts) will request a feasibility study from the USDA Natural Resources Conservation Service (NRCS). If the project is deemed feasible and the project sponsor wants to proceed, the NRCS assists in developing a watershed plan. Depending on the scope of the plan, it may then require congressional approval to allocate the federal funding necessary to complete the project. Once the funds are appropriated, the project sponsor obtains easement and rights-of-way then construction begins.

It should be noted that most of the dams constructed through this program are located on private lands, and although the dams are funded by the federal government, the lakes formed by the dams are not required to be open to the public.

BENEFITS OF THE WATERSHED PROGRAM

The 2,107 upstream flood control dams constructed in Oklahoma have established a $2 billion infrastructure that provides benefits to thousands of citizens. In fact, it’s estimated that the dams and accompanying conservation practices in the watersheds provide approximately $96 million in benefits each year.  Not only do they provide flood and erosion control to over two million acres of agricultural land in downstream flood plains, but they also provide sources of water for livestock and irrigation and habitats for wildlife. 42 of the flood control dams were constructed as multi-purpose structures, which provide municipal and rural water supplies and recreation areas for local communities.

High Hazard Potential – Dams where failure or mis-operation will probably cause loss of human life.

Significant Hazard Potential – Dams where failure or mis-operation results in no probable loss of human life, but can cause economic loss, environmental damage, disruption of lifeline facilities, or can impact other concerns.

Low Hazard Potential – Dams where failure or mis-operation results in no probable loss of human life and low economic and/or environmental losses. Losses are principally limited to the owner’s property.

As of May. 1, 2021, Oklahoma has 1,674 low hazards, 164 significant hazards, and 260 high-hazard flood control dams. in the state are classified as “high hazard,”  Hazard creep, also known as risk creep, is a term describing the gradual increase in anticipated consequences of a dam failure due to infrastructure development either along the drainage below a dam or within the reservoir area upstream of the dam.  Even though the physical condition of a dam may not have changed, hazard creep can result in an immediate adverse impact on the overall risk profile of a dam.  For example, a historically low hazard dam could become a significant or high hazard if a new residential development is constructed within the dam breach floodplain downstream of the dam, thereby increasing the potential consequences of a dam failure.

Protecting the lives and safety of Oklahomans is a top priority for the Conservation Commission. Only through continued investment in operation and maintenance will future generations enjoy the promise of reduced flooding these dams offer. Based on program history, an estimated $1.5 million is needed each year to operate and maintain these dams. This funding need is driven by an aging flood control system, deferred maintenance, and limited funds for operation, maintenance of dams in past years.

The Commission provides each watershed technician and aide with a watershed truck, compact track loader and trailer, side by side and trailer, GPS, and computer. With this equipment staff can perform O&M such as removing brush/trees and repairing erosion caused by cattle. The service area for most of the watershed aides includes multiple districts.

Each fiscal year the Commission budgets funds for watershed O&M that are made available where districts are the primary local sponsor and other funding is unavailable. Expenditures are tracked by district, site number, and type of work. In addition, the watershed technicians are equipped with compact track loaders (CTL) and are available to assist districts with watershed O&M. To request funds or OCC watershed staff and equipment a conservation district would need to complete an OCC-8H form.

In Oklahoma, watershed sponsors are usually conservation districts. The USDA NRCS Watershed Program requires a local entity of government to be a watershed project sponsor. Sponsors must have the power of eminent domain or the ability to assess taxes and enter into an agreement with NRCS that spells out sponsor responsibilities.

For additional information regarding sponsor responsibilities, head to the National Watershed Coalition website.